The founder of the Lord Somers Camp and Power House organisation was the Right Hon. Lt-Col. Arthur Herbert Tennyson Cocks, KCMG, DSO, MC, sixth Baron of Somers of Evesham in the Peerage of Great Britain, sixth baronet of Dumbleton and Lord Lieutenant of Herefordshire. He served a term as Governor of Victoria from 1926 to 1931, and during this time, in 1927, he became acquainted with the concept of the Duke of York Camps in England, in which youths from all walks of life were brought together to develop
greater tolerance and understanding.

The idea appealed greatly to Lord Somers, and he enlisted the support of business and community leaders to set up a similar organisation in Victoria. With Dr. C Gordon McAdam, he initiated the first Camp at Anglesea in 1929. This was very successful, and was followed by the 1930 Camp, also at Anglesea. A permanent location at Somers was then found, and the 1931 Camp was held there.

In 1931, the Power House was formed to continue the association of former campers in Melbourne. Sporting clubs were being formed, and so some ex-school rowers banded together to form the Power House Rowing Club.

A permanent base was needed for the organisation. In early 1932 Dr. McAdam, then Camp Chief, approached the Albert Park Committee to ask for permission to erect a boatshed for the Rowing Club. This was agreed, subject to the plans being approved, which they were at the next meeting, and by June 1932 the building on the eastern side of the lake was open. By December Dr McAdam was requesting permission to construct an extension to the building, to cope with extra boats and to provide a gymnasium. 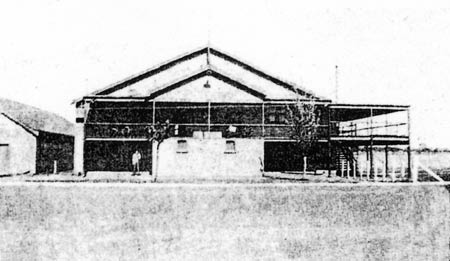 The Power House in fact already housed a growing number of sports and activities and social events which all required far more space. The committee agreed, but said that no more building would be permitted on
this side of the lake as local residents were unhappy about the proliferation of boatsheds and club rooms.

The Rowing Club was first officially constituted in 1933. Lindsay Orr was elected Captain and remained in this position until 1939. Other Office-Bearers during this period included J. Sutherland (President), J. Scales and A. Beattie (both Vice-President) and A.E. Forster and F.W. Hiddlestone (both Vice-Captain).

In 1934, Mr. G.R, Nicholas of the “Aspro” family donated a racing eight, which was duly christened by Miss Betty Nicholas. In 1937, the Club received a Racing Four, which was christened by Lady Somers during a return visit made by her and her husband.

The following notice appeared in the Power House Journal number 2 of 1935“Rowing:– “We are anxious to see more members taking up the sport of Rowing. As a sport it is to be highly commended and is a splendid physical developer. Mr J Barton, the Coach, is anxious to see all existing members of the Club at practise during the Winter Months. Training times are Wednesday nights 5.30 to 6.30 pm, Saturday afternoons 2 to 5pm and Sunday mornings 10.30 am. All training is carried out at the Club House and all wishing to join the Club should report to Mr J Barton at the above times”. The Coach, Jim Barton, was a well-known Rowing identity, having won at Senior and Interstate level.

The Club boated in Maiden and Novice Eights and Fours winning at various regattas. Probably its first most prestigious win was in the Australian Henley Maiden Eights of 1935. Two years later, they scored a repeat win in the same event.

These crews were seated as follows:

The last known success for the members of the Club prior to the outbreak of World War 2 was a Senior Four at the Army Service Regatta in May 1939.

In 1939 the Club ceased operations for the duration of the war. Many of the rowers had already joined the Power House Training Unit, C Company of the 14th Battalion, along with members of other Power House sporting clubs and Lord Somers camp.

Lord Somers had sent a copy of his own personal coat-of-arms to the Camp Executive in December 1934 recommending its use in the formulation of an honour pocket. From this a special Power House blazer was designed and the system of blazer awards was instigated.

To this day the honour pocket is still awarded to individuals who perform above and beyond the course of normal service. The crest of the honour pocket has the Power House Motto “Prodesse Quam Conspici” which in English translates to “Service without Recognition”.