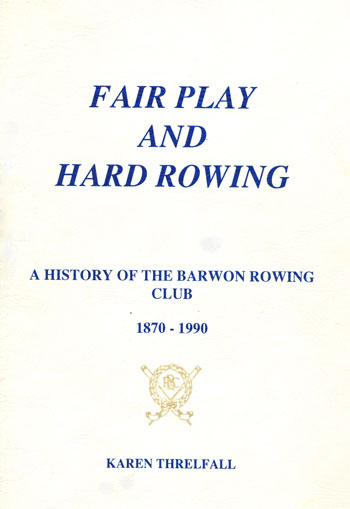 Here's a health to the Barwon, the heroes of old,
Ted Nicholls the Captain and Shannon the bold,
Pat Creasy and Christie and Simpson the stroke,
And Norman and Steedman, the true hearts of oak.

There's a lake up at Colac and some by it swear,
Another at Ballarat hardly so fair,
There are some who the floods of the Yarra defend,
Give us the old Baron, hard all to the end.

Long flourish the catch and the slow swinging sway,
That sends the old colours in front of the fray,
The love of the river, the love of the work,
The joy of the struggle that none of us shirk.

And here's to the Grammar, we too have a pride,
In the Bonnie Blue Flag that works hard by our side,
In the crews at the "Head of the River" that glide,
In the fellowship nothing on earth can divide.

And here's to the College, just starting to race,
They too as a school are well worthy a place,
May the good old dark blues never falter or fall,
Till the coxswain with triumph cries out "easy all".

And here's to the Barwon, no pot-hunters here,
No lovers of betting, no soakers of beer,
Fair play and hard rowing, by these do we steer,
To triumph untarnished and victory clear. 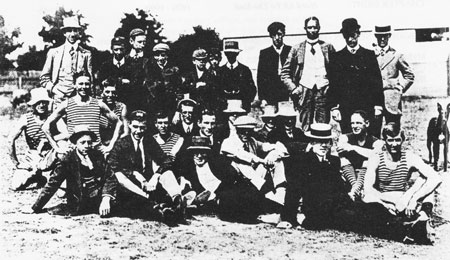 The Barwon Rowing Club was established in 1870 for the encouragement of rowing on the Barwon River by people living in and around the area of Geelong.

The club came from humble beginnings, survived two World Wars and the Great Depression to be an outstanding contributor to a wonderful sport. Over the years it has fostered fellowship and mateship within its ranks and this philosophy is carried on by the present membership.

Many outstanding sportsmen and sportswomen have come through its ranks, with some achieving the ultimate dream of representing their country in rowing.

This book gives a detailed account of the club's history from its inception to the present day. The reader will find the contents informative with a touch of nostalgia and intrigue for the young and young at heart.

The membership is indebted to Karen for her many hours of research into the club's history. Karen was President of the club from 1986 to 1988 - she may be in fact have been the only female President of a rowing club in the world.

At the general committee meeting of the Barwon Rowing Club held on 20 August 1985, it was suggested that a sub-committee be formed to look into the history of the club and to reproduce and update the photographs. After some discussion the following motion was put: "That a sub-committee, to be known as the Historical Committee, be formed under the chairmanship of the Assistant Secretary. The Chairman shall have the power to co-opt members to this sub-committee which shall be responsible to the General Committee". The motion was moved by Ray Lahey and seconded by Robert Gardner. The assistant secretary at the time was Jim Brady.

A few weeks later I was approached by Rob Oliver, committee member and family friend, with a view to participating in this project. At the time my daughter, Danielle, was rowing at the shed with her school and so, gradually, I came to meet members and to become involved in the social side of the club. In May 1986 1 filled a vacancy on the committee and then, to my astonishment, two months later was elected president. At about the same time I began to research the club's history.

Well, all that was six years ago and finally the history of the club is documented. Robert Oliver and Jim Brady remained enthusiastic about the project over this period, as have many other club members. My thanks go to Len Gladman for the loan of personal scrapbooks and for keeping me on the job; to Ian Laird for the generous donation of invaluable material, dating back to 1879, that his father had rescued after die 1952 flood and which his family had kept safe; to Lex Quinn and Ian Murray for the unstinting donation of their time and knowledge, particularly in relation to the Barwon Ladies Rowing Club; and to Geoff Hunter for making available documents gathered during his presidency.

The club's history could not have been written without the foresight and concern of two people: Ray Lahey ensured that minute books dating1891 to 1933 were kept safe and during his term as secretary, no researcher could dating, asked for more complete and detailed minutes: Bill Grose endowed his rowing memorabilia consisting of photographs and trophies dating back sixty years, to the club.

There are others to whom I also owe a debt of thanks. The research for the majority of this work was gathered at the Geelong Historical Records Centre where the archivist, Norman Houghton and his staff were most welcoming and supportive. My husband, Denis and daughters Danielle and Simone, supported and encouraged me throughout a very long six years - my heartfelt thanks to them.

Finally, a plea to the current rowers and members: the everyday paraphernalia of the club is tomorrow's history. Treat it with respect and care and may a Bill, Ian or Ray emerge from your ranks so that the next 120 years of a very Special club will be there for future rowers.