By November 1945 both local clubs were back into the swing of things. Late in November combination eights on the Barwon, involving Corio Bay, Barwon and the two school boat clubs, were attracting large entries of more than 100 oarsmen and a satisfactory public interest. However, an even larger crowd turned out at the Barwon clubhouse just a fortnight later. Five hundred people crowded into Barwon's rooms, and another 300 were turned away at the door, to watch the Geelong boxer, "Kid" Young in a special training bout before his challenge for the Victorian Lightweight Championship at the Melbourne Stadium. Even two of Young's sisters were unable to gain entry. Bill Grose was Young's masseur at the fight which Young lost.

At the annual general meeting held in 1946 the retiring- secretary, A. F. Grant announced an increase in membership, not only of returned servicemen but also of a number of young men. The club was starting the post-war years with a healthy surplus of almost £50, thanks to the efforts of an enthusiastic social committee. The letting of the club's rooms to "Kid" Young had also boosted the funds. The annual meeting had been postponed due to the death of the club's president, Archibald Shannon, on 15 September. The club's special "welcome home" night for servicemen, planned for the same night, was also postponed as the club mourned the passing of a popular president who had joined the club in 1907. The office of president was filled by A. C. Clifton. The 1946/47 season saw two significant wins: the Maiden Eight at Ballarat and Barwon regattas with a crew of L. Quinn (st), W. Wheatland, A. James, M. Donald, L. Greaves, S. Impey, B. Lewis, J. Pohlner, M. Dunstan, cox and coach W. Grose and the Lightweight Maiden Four at Bairnsdale and Sale regattas with A. Williams (st), R. Stevenson, F. Carty, R. Gilbert, B. Beach cox and coach J. Pryor. The 1947/48 season saw a membership in excess of 50 and was the best rowing season for the club since the war with eleven regatta wins and a third placing in the VRA Junior Premiership. The most significant of the wins included the Major Eric Brind Cup for Maiden Eights at Ballarat by M. Ball (st), E. Richards, A. Pettigrew, A. Moody, J. Wilks, J. Webb, 1. Anderson, R. Turner, D. Watson, cox and coach W. Grose. The Richardson Cup was revived, by S. J and F. E. Richardson, with the first of the new races held in March 1947 and won by Corio Bay. 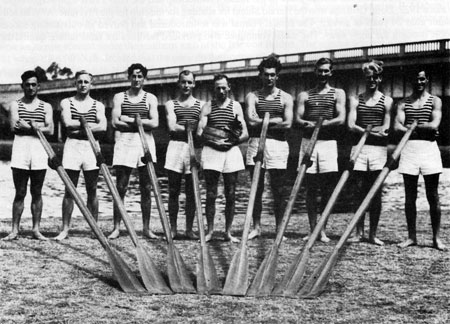