The 1920 annual general meeting marked Barwon's Golden Jubilee. The club's 50th year was to be one of the most successful and enjoyable of seasons. The forty members that night at the Commun Na Feine hall toasted the health of their last surviving founder, Charles Shannon. Frederick Pinson, another founder, had passed away in May. The committee looked ahead to a decade of prosperity and peace. There was a surge in membership after the war when the men returned and were anxious to forget the horrors of the past years. All sports and leisure activities were popular as not only the returned soldiers, but youths who had grown up at home during the depressed war years were anxious to make the most of the gift of life. The Henley on the Yarra Regatta, held on Derby Day, 1 November 1920, provided a magnificent spectacle for 100,000 spectators.

The Harbor Trust's punts, glorified into river boats were triumphs of artistic camouflage. The myriad decorated small craft presented a picturesque sight, resembling water flowers moved along by invisible hands. The arrival of the Governor-General was signalled by a burst of trumpeting and the playing of the National Anthem. As darkness fell the lights began to twinkle on the shore. Boats ablaze with Japanese lanterns crept like fireflies up the river, mirroring their beauties in the water. The sparks of a hundred fireworks lighted the skies. The Derby crowd, with their pockets full of notes or sorrows, joined in the throng, making the night one of the most memorable and crowded in Henley's history.

In November the committee revived the pre-war plans to extend Barwon's facilities, with a river carnival considered the best way to raise funds, given the success of Henley on the Yarra. A public meeting convened by the Mayor, Ald. Hitchcock at the request of the club, decided to combine the carnival with the next Barwon Regatta. "Henley on the Barwon" was to be conducted by both Barwon and Corio Bay rowing clubs with the proceeds split three ways between the two clubs and the general improvement of the rowing reserve. Meanwhile at Barwon a sub-committee was appointed to design and finance the proposed new works. As well as providing extra boat storage under the one roof to replace the numerous outbuildings accommodating the fleet and more modern facilities for the rowers, the overall scheme was to cater for the extension of the club's activities into athletics and other sports. By now the club membership had grown to more than 80, who participated enthusiastically and not only in competition as the local press reported:

The emulation of the achievements of fellow members at the Colas Regatta has become a craze, amounting almost to mania at the Barwon sheds, and so skilful have some become in the difficult art of righting over-turned boats that it is hard to know to what lengths members will go.

Not content with shallow water, Victor Buchanan has been observed essaying the impossible task of righting a sculling boat in the deep water of midstream, to the obvious delight of sundry small boys, whose well-meaning, if impertinent advice, was evidently not appreciated. Of course, these capsizes are intenational, this we do not doubt.

Week-end river picnics and smoke socials were popular with the club members and the friendly spirit at the club was said by itself to attract new members.

With the new year came the Barwon Regatta incorporating the Henley-on-the-Barwon Carnival. A large crowd thronged the reserve which was decorated with bunting and lights strung from high poles, amidst the side shows and refreshment marquees. However, it did not rival the spectacle of its equivalent on the Yana, although it was noted that the solitary craft rigged with Chinese lanterns had made a pretty picture. Both rowing clubs and the reserve improvement fund profited £90 each. It was at this regatta that the Barwon Regatta Committee initiated a trophy for coxswains, a first in Victorian rowing. It was later taken up by other regatta committees and became so popular that eventually it became VRA policy.

The building sub-committee reported back with a proposal which included the addition of a second storey, construction of a balcony, secretary's office, boardroom and billiard room and the provision of a gymnasium equipped with boxing ring and wrestling mat for the planned athletic section of the club. Electric lighting was to be installed as were facilities for an evening meal for those rowers in training. Early in June 1921 A. Renshaw's tender of £865/10/-was accepted. The boats were moved into temporary storage on the river. Both the Grammar and College sheds were now next to Barwon as Geelong College had moved from further upstream in April. These two sheds were already crowded as at the same time Corio Bay was in the process of building a boatshed on the river. By the end of August the reconstruction of Barwon's boatshed was well under way and all Geelong rowing was gathered together on the banks of the river. The building was financed by issuing debentures in the new Athletic Section at £1 each. 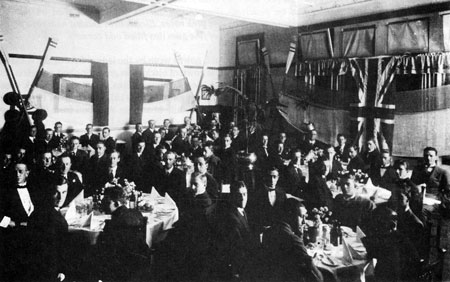