Over those tentative first years only Corio Bay was considered suitable for aquatic sports. However in April 1864 the first club located on the Barwon River was founded. Twenty members enrolled in the Barwon Boating Club and an application was made to the government for a piece of land on the river bank, near the Moorabool Street bridge, as the site for a boathouse. Fourteen members owned boats but did not row on the Barwon as there was no safe storage for their craft. However, this club was not primarily for rowing, being interested in sailing on nearby Lake Connewarre and eventually met the same fate as its predecessors. Then on 9 May 1865 a rowing club was formed under the patronage of a well known lover of aquatic sports, Mr. Heath. It was called the Geelong Amateur Rowing Club and Messrs. Gibbon, Jackson, Reeves, Wm. Shaw, jnr., W. H. Anderson, Buzzard and Wm. Tait were elected as members. Within a few days 20 more young men had expressed an interest and the secretary, Mr Farrell, had written to the Melbourne clubs for a set of rules. The club applied to the Commissioner of Customs for a piece of land on the Eastern Beach as the site for a boat shed. The club already had the use of a boat which was located on the river and plans were made to bring it to the bay.

By the end of June membership had doubled-and the name was changed to the Corio Rowing Club. Mr Fraser, a customs officer, was appointed as an instructor and the shed was completed. Within two months there was another boat and plans were afoot to locally commission a "randan" especially for middle-aged gentlemen, and a set of oars. In September their new boat was christened the Planet, joining the Comet and the Meteor, and a four-oared outrigger was ordered. Built by Greenland the Richmond boat-builder, it was a 44ft long cedar gig named the Lady Don and arrived in October.

Three four-oared crews and a pair competed at the 1865 Geelong Regatta. On 2 May 1866 at Mack's Hotel the club held its first annual meeting with 20 members present. Captain Heath was re-elected president and Farrell as treasurer, with P. Rose stepping down as secretary and replaced by Reid. The club had finished its first year with a credit balance of £29/7/8, four boats had been purchased and a new boatshed built. The Planet and the Comet, one a four and the other a pair, were to be sold and two new gigs ordered from Greenland. In December 1866 the club competed at the Geelong Regatta in the Senior Four-oared gig race with a crew of G. Graham [stroke], Ivey, Arthur and Nicholls with A. Hobday as coxswain.

Rowing was proving extremely popular, so much so that on Friday, 29 March 1867 at the Eureka Hotel, a second Tradesman's Rowing Club was officially inaugurated. At a meeting held a fortnight later, Mr Wood as vice-president, Mr Roche as captain, Mr Taite as secretary, Mr Ford as treasurer and Messrs Rippon, Gough, Collins and Graham as a managing committee were elected. Then, in November 1867, caught up in the excitement of an impending royal visit, the Prince Alfred Rowing Club was formed. The Geelong Regatta was to be visited by the Duke of Edinburgh, Prince Alfred, and Geelong was agog at its first royal visit. Roche, Ritchie, McDuff and Arthur were approved as a crew for the new club at the Melbourne Regatta and Irwin, Snr., Irwin, Jnr., Fox and McCallum for the Geelong Regatta. By 8 November, 30 persons had joined, some from the Corio Club. The Prince Alfred Club had two boats, the Galatea and the Southern Cross. The royal visitor duly arrived in early December and whilst the visit was a huge success with the townspeople, from the rowers point of view it was a dismal failure. The Duke merely walked onto the Yarra Street wharf and off again, not showing the slightest interest in the rowing events nor the club named in his honour. The Corio Club had not entered a crew, despite the addition of two test-string gigs and a pair-oared sculling boat to its fleet. The boathouses had been improved and the landing stage lengthened to cater for their 42 members, but at the end of its third year the club had surplus funds of only 6s/3d, whilst its liabilities were £35. For the club's fourth year, C. E. Farrell was elected president, Wm. Rose as treasurer and John Arthur as secretary.

Despite the formation of the two new clubs to join the established Corio, rowing as a sport was ailing. The new clubs were formed to compete only in the rowing race held during the Geelong Regatta and the members of the Corio Club were said to be lazy and indifferent, gathering together just a few weeks before a regatta at Melbourne or Ballarat. Two months after the royal regatta, the Corio Rowing Club was finished; on 25 January 1868 its boats and sheds were put to public auction. Four unidentified rowing enthusiasts bought the club's effects for £32. These four gentlemen formed themselves into the Geelong Rowing Club and by the end of February were holding scratch races. McDuff, R. Roach, J. Kett and Arthur were the No. 1 crew and H. Horn, G. Miller, J. McDuff and M. Fox were the No. 2. Their first race was on the Yarra River in April where the local press reported that they were booed and hooted by spectators on their way up to the start. Heavy seas on Corio Bay for the preceding week had meant they had no practice and they lost to the Civil Service Club by two lengths.

In May 1868 some members from the Geelong Rowing Club decided to form a branch on the Barwon River as more than 25 interested young men lived too far from the bay to attend practice. Late in May a meeting to form the new branch, to be known as the River Barwon Rowing Club was held at the Barwon Bridge Hotel, when the 25 men promptly signed up. It was proposed to erect a shed within the month.

But by the beginning of 1869 all four clubs; the Prince Alfred, the Tradesmen's, the Geelong and River Barwon, existed in name only. At the Geelong Regatta held late in January 1869 the four-oared race was contested by two Melbourne clubs, Melbourne and Argus, Geelong rowers being unable to forma crew to compete on their home ground of Corio Bay. In contrast, the 1869 Melbourne rowing season was opened with ten clubs and 200 oarsmen participating in an impressive river procession.

Late in January the local press reported the intended arrival in Geelong of Mr. Nelson, a boat-builder from Greenland's firm and an old Thames waterman. It was hoped that this would rekindle an interest in rowing. However the year closed with only G. Graham and J. Arthur occasionally seen in their gig rowing solitarily across the bay towards Limeburner's Point. 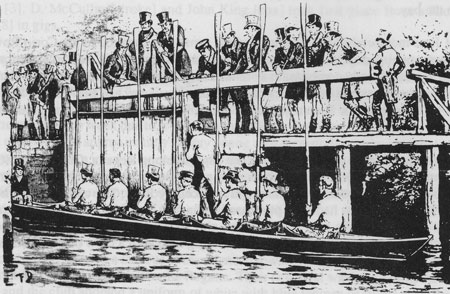