The 1991/1992 season saw the Club named a record number of new boats as the fleet underwent a major overhaul. A total of ten boats were named on 1st December 1991 in a huge display of new equipment. Three new Sykes pairs of nomex construction were acquired. These boats were named after our world champions Sam Patten, Michael McKay and Andrew Cooper. 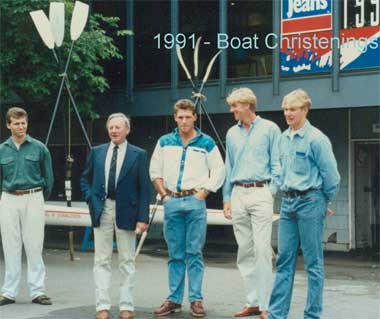 The Scotch-Mercantile Regatta generously assisted with the purchase of a nomex coxed four that was named "E. C. White". Trader Al kindly donated another set of carbon fibre oars that were used by our Men's Youth Eight.

The Committee for this year again headed by Bob Aitken as President and Jeff Lawrence as Captain. Bill Webster continued as Secretary, Sue Lee as Treasurer and Daryl Teschendorf as Chairman of Selectors.

The Captains' Trophy was again won by James Tomkins but this time jointly with Andrew Cooper. Brett Hayman also once again proved to be the most successful coxswain winning the Max Baily trophy. Perhaps more interestingly, Olympic Champion Andrew Cooper won the Cooper Trophy for his efforts with the social activities of the Club.

The build up to the Barcelona Olympics dominated this season. Back to back Gold Medals to the Oarsome Foursome and the prospect of another 4 or 5 members being selected in the men's eight generated an unprecedented excitement around the Club. The season started with a black tie dinner at the National Gallery in celebration of the gold medal four.

The Olympic Team were set to leave Australia at the beginning of June. The Men's eight had the important task of qualifying for the Games. With this in mind the Committee saw fit to bring forward the Annual General Meeting by one month to the 30th May in so that the meeting could also double as a celebration and farewell function for our Olympians.

On Sunday 2 August 1992, over 300 members and friends were gathered in the clubhouse to watch 7 members race for Olympic Gold live on a big screen. Channel 7, the Olympic broadcaster had cameras and a reporter to capture the moment, CUB generously supplied a significant number of barrels to lubricate vocal cords, this was to be perhaps the biggest night in 112 years. At prime time on that Sunday evening the ever audience to watch a rowing race in Australia tuned in to see the Oarsome Foursome, raging hot favourites, race for Gold. 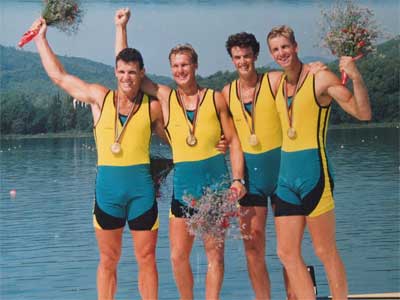 The race went exactly to plan, after 500m the insightful TV commentary of team manager Andrew Guerin could not be heard for the roar of the crowd. After 5 minutes 52 seconds the Oarsome Foursome had sealed victory by 2/3rds of a length and the joy of the members was unrestrained.

The Men's eight raced valiantly but were not a match for the Canadians but this could not dim the celebrations at Mercantile that night. A proud Captain exalted our very own Olympic Champions on national television. 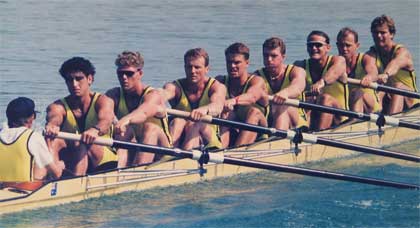 Derek Mollison raced in the lightweight four at the World Championships in Montreal Canada and finished eighth.