This was another good season for the Club. Ignoring those members at the Australian Institute of Sport, the Club was represented in 21 of the 44 events at the National Championships. The President Bob Aitken however expressed his disappointment that the Club was not also represented at country regattas. He also regretted the new habit of crews not training on Sunday mornings thus eliminating the social gathering of members at noon. Unfortunately, this trend was to continue with only a few people maintaining this gathering.

The highlight of the early part of the season was the great World Championships at Lake Barrington where so many Mercantile members raced and nearly a quarter of Mercantile member attended to watch the fanous victory by the Oarsome Foursome on 4th November 1990. This victory vindicated the policy of the Club of pursuing success at the elite level.

This was again to be repeated in 1991 with another world championship to the Oarsome Foursome with many other members racing. Our representatives were: 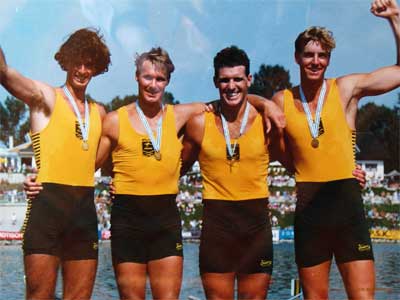 The National Championships produced victories in the men's coxed and coxless fours, under 23 eight and women;s under 23 pair.

The Interstate Championships produced another King's Cup victory with a crew dominated by Mercantilians.

New technology in boat building was starting to have a major impact. Nomex and honeycomb sandwich boats were to be the way of the future and a major renew was necessary if the Club was to remain competitive on the water. With generous terms from boabuilders, a new eight the "Jeffrey Lawrence" was purchased for our Men's Youth Eight. Our senior men's crews took delivery of two new Sykes nomex bow coxed fours "Noel Donaldson" and "N. W. Cairnes". These fours were equal to anything in the country and some 15 to 20 kilograms lighter than the boats they replaced.

With the assistance of the McFarlane family and Ausrowtec pair "James Tomkins", this pair was used by Anna McFarlane and Celia Patterson to win the National Under 23 Championship. Two Sykes pairs "Warwick Hutchins" and "Peter Watkin" were also purchased, these ex-AIS pairs were less than two years old and had been faultlessly maintained. The purchase of these boats came at a significant saving, as the 23% sales tax was not levied on equipment deemed to be second hand. The AIS had a policy of turning over their equipment every 18 months to 2 years, this high quality, well maintained equipment was then brought back to as new condition by the manufacturer and offered for sale at very reasonable price and no sales tax. These relative bargains were to become a feature of Mercantile's boat replacement. These purchases were made possible by the sale of the eights "Andrew Guerin", "Martin Tomanovits", the fours "Phil Cayzer", "Lance Hill" and "Roger Wilson" and four sets of oars. Donations from Peter Watkin and Trader Al enabled 40 new oars to be purchased.

On the social front, Andrew Evans was continuing his great efforts in keeping the South West corner operating as a strong revenue stream for the club.

The Captains' Trophy for most regatta wins was won by World Champion James Tomkins, the Max Bailey Trophy for the most successful cox went to future prominant Australian representative and RA Board member Brett Hayman and the Cooper Trophy for club member of the year went to Noel Donaldson. The citation for Noel's award was not only that he was a world champion coach, but that he also contributed to the Club in many other ways including as patron and coach of the 2XS group!