Nontheless, Mercantile remained the number one club in Australia and the season saw the Club focus on rebuilding its youth and junior ranks. The success of this recruiting programme was seen in the club boating two youth men's eights during the season.

At the Senior level the post Olympic season demonstrated a lack of depth in Australian rowing and this was certainly the case in Victoria and at Mercantile. The senior men's squad was coached by Paul McGann and consisted of only one coxed four where there had been three the previous season. The Under 23 squad also consisted of only a coxed four that was coached by Noel Donaldson.

In the womens programme, it could only be described as a frustrating season. While the potential for a successful season was there, the winning potential was thwarted by selection policies for Victorian crews, with many of these oarswomen sequestered early in the season into the state squads. In many ways these types of issues were to become a recurring theme in the development of our Club after its centenary year.

The 1988/1989 season saw the club win a total of 48 races, however these were in the lower and younger levels of the club. As was to be expected, with the number of retirements and those on sabbatical, the senior end of the club was somewhat lacking in depth.

The formidable coaching partnership of Aitken and Richardson did not continue into the new season. At the end of 1988 Marty Aitken accepted a full time professional coaching appointment at the University of London, Brian Richardson decided to focus his attention on sculling. Paul McGann took on the coaching of a Senior Men's squad that was in a rebuilding phase. Following Gary Merritt's return to Queensland the Men's Senior B crew was without a coach unit just before Christmas 88 when Noel Donaldson agreed to return to Club coaching and take them on. David Pincus continued to coach the Men's Youth Squad and Jeff Lawrence coached the Junior Men.

The Women's Youth Squad was boosted at the end of 1988 by the arrival of Junior Championship medal winners Celia Patterson, Fleur Spriggs and Gabrielle Menzies. They were joined in a four by a promising lightweight recruit from Geelong Grammar named Rebecca Joyce. The crew coached by Brad Fry won a number of races and was selected as the Victorian Youth Crew to compete in the Bicentennial Cup. Unfortunately the cancellation of the Interstate Regatta due to bad weather denied them a championship but Patterson and Spriggs were selected in the Under 23 team and Joyce in her first year out school was selected in the Senior Lightweight 4- for the World Championships in Bled.

This crew was significant for Mercantile as Celia Patterson was to go onto be our first female Captain, Fleur Spriggs was to become an international representative and Rebecca Joyce an Olympic and World Championship medallist. Rebecca Joyce also was awarded the H R Frederico trophy for the most improved oarswoman of the Club - an honour no one could dispute.

The Club was the recipient of a generous donation of a racing eight from Arthur Atkins which was duly named in his honour. The eight "Arthur Atkins" was partly of Kevlar construction to a new design and was also used by the King's Cup crew in 1989 and 1990. The club also received a donation of a racing four from Energy Resources Australia following good work behind the scenes by Sean Colgan. The financial collapse of S&B boatbuilders left the Club short of a boat as a defebtive boat was returned for replacxement just before their collapse. 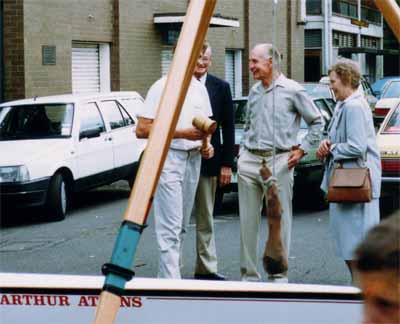 1988 boat naming of the Arthur Atkins

The unfortunate weather encountered at Carrum perhaps prepared members for the disaster to follow at the National Championships. Cyclone Ned forced the cancellation of the regatta early after only a handful of finals had been decided. The King's Cup and all interstate events were cancelled for the first time in history, other than in war time. Our competing crews had good reason to be upset at the cancellation. Pre-regatta form particularly that shown by our Senior B Men's crew under coach Noel Donaldson clearly demonstrated that Mercantile would continue to dominate the result.

Reg McKay and Andrew Guerin were key players in trying to have the King's Cup run at Carrum following the failure of Lake Wellington in WA. Unfortunately despite sponsorship on offer from Cadbury, not all States would come to the party. A new event was created for the States who attended, the Patten Cup. Victoria, South Australia and Western Australia raced with an easy victory for Victoria. The magnificent trophy was provided by Barry and Patsy Patten. The mist over Carrum lifted moments before the event and the race was rowed in perfectly still conditions as the photo below shows.

1989 Interstate Challenge for the Patten Cup