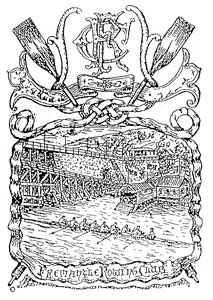 The illustration on the cover of the Club's history

This history has been accumulated using as a basis two documented records.

The first of these record was a history presented at the Golden Jubilee Dinner by Frank E. Shaw and covered the first fifty years of the Club. Frank joined the Club in 1894 and served with distinction as an oarsman, captain, coach and president, over a period of forty five years.

The second of these records was a history presented at the 90th Annual Dinner by John E Jeffreys and complemented the history by Frank Shaw in covering the succeeding forty years. Jack (as he was known) joined the Club in 1933 and also gave distinctive service as an oarsman, treasurer, secretary, captain and president over a period of forty four years.

It is recorded that each of these men was President of the State Rowing Association and both served with success in interstate competition.

It has been possible to enlarge on the original recordings by reference to the Club Minute Book (available from 1913 onwards) Regatta Programmes and Annual Reports of the Club together with information gleaned from press cuttings and a search amongst the State Archives.

It has also been possible to draw on my memories of reminiscences which rolled out from men such as F.E. Shaw, R.S. Jeffreys and G.G. Campbell (also of Scotch College fame) on the setting of the lawns and rose plots of Frank Shaw's Bindaring Parade Cottesloe home where on Sunday afternoons in the 1920's tennis was played and tea and cookies served by the Shaw family on a magnificent white table cloth and with a shining silver teapot in a truly grand manner.

Fremantle Rowing Club became Incorporated under the provisions Of the Association's Incorporation Act on 16th November 1962.

Every care has been taken in the compilation of this history, the information has been taken from reliable sources and the compiler Ralph Jeffreys has every reason to believe in its authenticity.