A grant of $100,000 was finally approved for the construction of a new Rowing Club. Our many letters, submissions and deputations had borne fruit. Councillors Eugene Sandner, Neville Stilwell, Bob Campbell and Charlie Crawford, with magnificent support from the Bendigo Advertiser finally convinced Council that a new Rowing Club Facility should be top priority. Today's members owe them a debt of gratitude. 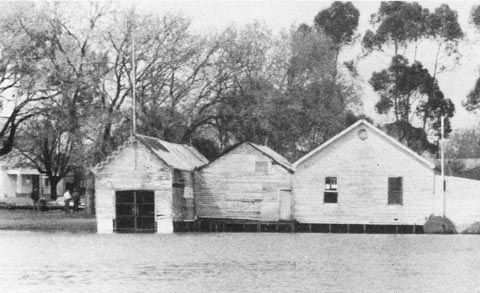 The historic row-up to the new boatshed took place on Sunday June 29, 1980. 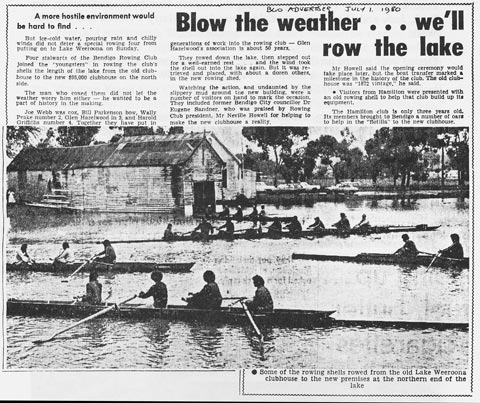 A Wreckers Ball and Nostalgia Night was a smashing success in the old Clubhouse. Vic Burnett saved the flagpole and one of the original roof shingles resides in the Trophy Cabinet. 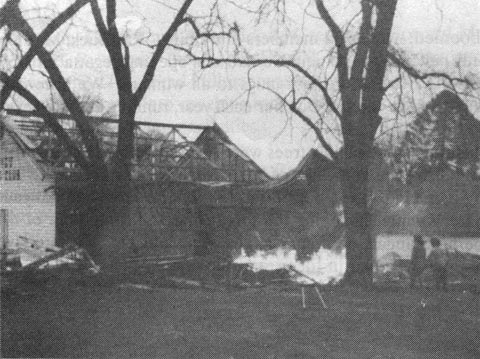 Demolition of the "Old Club Rooms"

In a new plan of attack on the Lake weed we purchased a strange weed cutter from the State Rivers at Murtoa. Bringing it home we stopped at the Avoca Forest Hotel, to allow the motor to cool down; and the publican after studying it for some time declared that he ..." didn't know what it was, but it was definitely the best one of its type! .." (that he had seen). It was as heavy as lead, slow and decidedly un-seaworthy (ask John McKenna - he took it on a submarine excursion). It had a turning circle to match the 'Titanic' and similar buoyancy characteristics. It served us faithfully and ponderously before it was pensioned off and the Council built a new improved model. 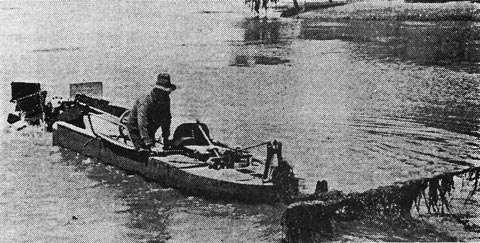