In 1973 the Club conducted an 'experimental' regatta at Lake Eppalock.
In 1974 Glen Heazelwood (a top rower in the '20s) returned to Bendigo and commenced coaching. He was a most patient and knowledgeable coach who introduced hundreds of Bendigo school students to the techniques of rowing.

With his friend Rex Randall, they carried out hundreds of hours of maintenance on boats and equipment.

Extract from the Bendigo Advertiser Aug/Sep 1976

Great excitement as we took delivery of the new fibreglass four "Glen Heazelwood" - making the club much more competitive.
Hayden Bennetts was the leading coxswain in 1977.

In 1978 a meeting was called of groups interested in being part of a new complex at Lake Weeroona.

Neil Manefield arrived in 1979; a powerfully built surfboat rower and working in the Army, based at Fortuna. Said he.. "I just wanted to improve my bladework - thought rowing on flat water would help the technique...". It sure did; coached by Neville Howell, he first won on the Yarra in a tub scull, then went on to win the Victorian Junior and Senior Sculls Championships in 1980. 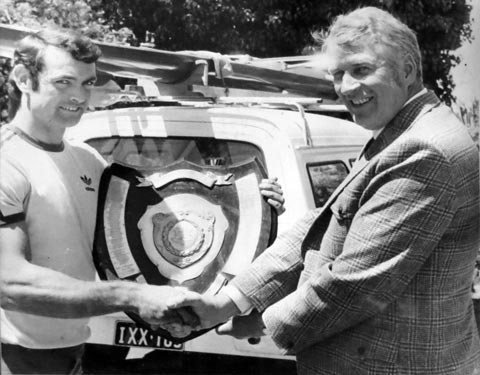 He sculled at the Australian Titles, being Victoria's representative in the Presidents Cup, but just went down to multiple National Title holder, Ted Hale. Neil moved on to Brisbane in his job and later rowed for Queensland in their Kings Cup crew. (A more modest, self effacing champion you could not meet).

Design work started on the new Rowing Pavilion and we took delivery of the new four - "Neville Howell". A most successful Trash and Treasure Auction conducted by Wal Griffiths raised $700.

At the Annual Meeting, President Neville Howell thanked Paul Stoltz, Charlie Barton and Glen Heazelwood for their coaching during the year. The Schools regatta in 1979 was cancelled due to weed growth.