BENDIGO ROWING CLUBS 1970-71 Season was memorable it's '71-72 season will be unforgettable , and here are the reasons why.
.The club is enjoying remarkable success and...
.This is the Centenary year of rowing in Bendigo.

Bendigo Rowing Club was first formed 100 years ago in 1872 and is now probably at its peak. This year the club has three targets - a successful Centenary Regatta, the Victorian Rowing Associations premiership and Representation at the Australian championship regatta at Easter.

Six years ago this would have seemed impossible because rowing hasn't always flourished in Bendigo. From the late 50's until 1965 the Club came to a standstill mainly through lack of interest say present day officials.

From the foundation of the club in 1872 until it went into recess in the 60's rowers enjoyed reasonable success. Two of the first names from this era to spring to mind are Stan McGorm a Victorian sculling champion and the late Arthur Cambridge an Australian sculling champion.

The article goes on to say....
Bendigo was pulled out of the rowing slump through the efforts of Harold Griffiths 1st President of the reformed club (and current president) and ex-Olympian Neville Howell. A public meeting was held in the City hall and the Bendigo Rowing Club was re-born. After two years the weeds took over Lake Weeroona, the clubs home. Rowing was suspended for two years until the State Rivers and Water Supply Commission came up with a chemical which retarded weed growth the lake has now been in good condition for about three years and the same can be said for the club.

The then treasurer Mr John Barton said in 1970-71 we gained 54 points in the VRA junior premiership and finished seventh out of about 30 clubs. This year with only half the season gone the club already has 54 points and is 4th on the premiership ladder and 20 points ahead of any other country based club. 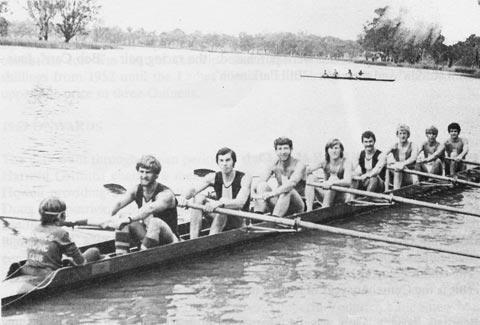 Since November last year the club has been represented at eight regattas and has had 14 wins. The junior eights crew has won two events this season the first wins by a junior eight in 41 years. It is fitting that all this success comes in the Centenary year and preceding the centenary regatta to be held on Lake Weeroona on Saturday February 5th,1972. This will be the first regatta on Lake Weeroona for 11 years. The President and Coach Mr Neville Howell said the regatta is being looked at as a trial by the VRA, if it is satisfactory, there is no doubt that Bendigo will have an Annual regatta with qualifying points.

A feature of the centenary will be the "Christening" of three additions to the fleet. The boats, a Four an Eight and a Pair have been named after prominent rowing figures Bill Parkinson( Bendigo delegate to the VRA), Tom Rodda(VRA official and Bendigo member) and Bob Carr (Present club secretary).