The records show that at the end of 1952 the balance in the account was eighty one pounds, seven and twopence($162.72). The records show that most income was derived from entry fees and fundraising activities associated with the Regatta, such as, Regatta day Booth, thirty seven pounds, afternoon drinks twenty eight pounds and a collection of twenty nine pounds. Almost all the funds raised were expended on the running of the Regatta and it was interesting to note that two eighteen gallon kegs cost Nineteen pounds in 1953.

Similar accounts appear for the next few years, interesting to note that each year a cost for the 'hessian' to construct the temporary fence, was a relatively high expense. This fence was erected to enable the Club to charge for entry to the Henley on Weeroona, after the original fence was pulled down during the war years.

Other interesting expenses that appear, are:
Cartridges from Hartley's for the starters gun, saveloys from Foggitts and rolls from C.H.Jeffrey's, Reed Bros. soft drinks and C.A.Roxburgh for rain insurance. By 1961 the cost of the liquid for the booth had risen to forty seven pounds, one consistent cost was that of the Pipe Band this remained at two pounds two shillings from 1952 until the Ladies Pipe Band took over the role in 1963 and upped the price to three Guineas. 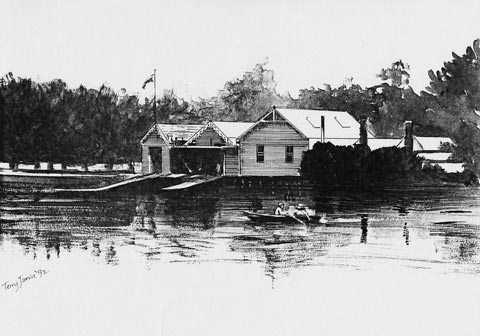 Drawing of the old boathouse by Terry Jarvis