(Compiled from an Advertiser cutting of the day, supplied by Mr Arthur Mahon, Bendigo)

The days proceedings officially opened by the Mayor of Bendigo Cr.D.W.Streader accompanied by Cr.R.Poulston and their respective wives. The then Club President, Mr.A.G.Unmack, said if the current post war period was anything like that which followed the first world war, Bendigo could look forward to a succession of rowing victories. He spoke highly of the work done by Mr.A.Wilson during the war years when the Club had been in recess and the manner in which Mr.Wilson had maintained the boats and equipment. Cr.Poulston declared the season open and congratulated the Club on the manner in which interest had been maintained during the war years and the splendid revival which had been made.

Vice President of the Club Mr. J. A. Burkett, moved a vote of thanks to the councillors and their wives for attending.

The article goes on to say:
Club membership at present is almost 60, with about 20 older members coaching the younger lads.

Mr.J.A.Burkett acted as judge, Mr.L.Unmack as starter, Mr.F.Hillman (Whom -to this day is a very active member and coaches the younger members on an every day basis)as assistant starter, and Mr.C.W.Seymour as dispatch steward. D.Marrows, who stroked the winning team, has for many years been one of the Club's foremost oarsmen. 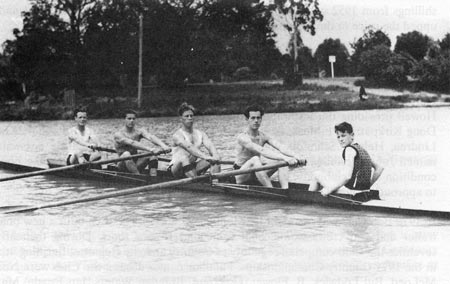