In 1876, forty-five acres of land was granted to the Council for "building or formation of a lake for boating and recreational activities".

It was fortunate for the Rowing Clubs that this land was granted, for on 6th December 1877, a defect in the bank of the Upper Grassy Flat Reservoir appeared. The Reservoir was drained to such an extent as to make the reservoir useless for rowing.

After three years work and an estimated cost of $10,000, Lake Weeroona, Aboriginal for "We Rest" was opened.

The lake was surrounded by a fence, the landscaping was said to have been very nice. It was in 1880 that the two clubs built their sheds and shifted their activities to the Lake. 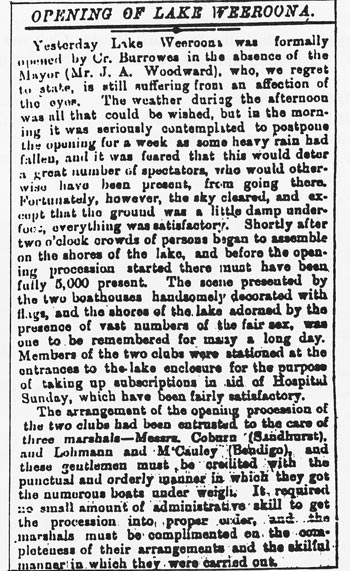 On 12th December 1883, the Council of Eaglehawk opened a lake below Canterbury Park called Lake Neanger.

Shortly afterwards, a women's rowing club was formed on Lake Neanger. This club rowed in competition with Bendigo and Sandhurst for many years. However the club disbanded around the 1940's.

Five thousand people crowded around the pier at Lake Weeroona on the 9th July 1884. The occasion was a visit to the Sandhurst Rowing Club of the champion sculler of the world, Edward Hanlon. To promote interest in rowing, he gave an exhibition of sculling.

< previous In the Beginning

> next Country Based Competition