2. A Message from the President 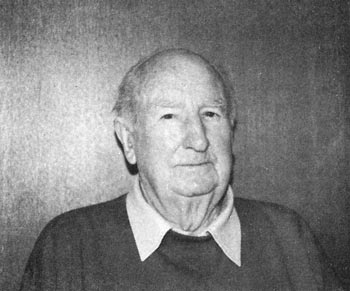 What a lucky thing for Bendigo that, way back in 1871- just 20 years after the discovery of gold in the area - Mr. John Godfrey came here from Hobart town in Tasmania.

Without going into all the details - I am sure they will be covered elsewhere - Mr. Godfrey had a vision to conduct rowing in Sandhurst as this city was then known. The Sandhurst Rowing Club was formed just 120 years ago.
You can just imagine the thousands of young men - and now young women - who have gained so much benefit and enjoyment over that long period of time. The name was changed from Sandhurst to Bendigo in 1927.

I joined the club in 1930. I think my earliest memories are of two great crews that represented this club in the early thirties. Coached by the late Mr.Arthur Cambridge, his crews won the Junior Eights at the Victorian Rowing Association and Australian Henley Regattas the following year. In my opinion they were the two best crews ever to leave our shed. It may be of interest to know that Mr Cambridge based his coaching methods on ideas set out in a book written by the late the Honourable Stanley Bruce, Prime Minister of Australia. It is believed Bruce wrote this book during a sea voyage to London to attend a British Empire Leader's Conference in that City.

Apart from the crews I rowed in during the late 1930's, I think the most memorable event, for me was the building of our own first boat trailer. Built almost as strong as the Sydney Harbour Bridge it was a great success. We used it first to convey our boats to the Ballarat Regatta (around 1936). Unfortunately, when turning into the road alongside Ballarat's Lake Wendouree we collided with a tram and took the bow right off the Eight (the trailer survived!) Borrowing a boat we competed in the regatta and were beaten by just 6 inches - "The certainties beaten!"

During the winter months, gymnasium classes were conducted in the old shed at Lake Weeroona. Vigorous exercises including boxing and wrestling followed by a run around the Lake made sure we kept fit for the rowing season ahead.(In those days there was no hot water so a cold shower on a freezing winter night was endured by all). The Club had some good wrestlers in those days and Bill Parkinson, Norm Bellis and Jim Muldoon were always prominent in the state Wrestling Titles.

Dances were held regularly in the old shed and a hard- working Ladies Committee was formed to help in these and other Club functions. The women in those days certainly offered valuable support to the fundraising so necessary for the Club's survival.

It must be remembered that the 1930's were the years of the Great Depression -times were tough, money scarce, so the Bendigo Rowing Club became the centre of our sporting and social life. We spent almost all our spare time there and we became a very close-knit bunch of men. The shadow of war which had been hanging over our heads during these years unfortunately became a reality in 1939. With the enlistment of many of our members, the Club was forced into recess until peace finally returned. It is here that I wish to pay tribute to our former members and friends in the Bendigo Rowing Club who sadly paid the supreme sacrifice during these terrible years and did not return to be with us again. The Club was reformed soon after the war and has continued to prosper ever since.

It has taken us 120 years, but, at last we have amongst our ranks an Olympic representative in Jason Day and a World Champion in Deirdre Fraser. I offer my congratulations to these young rowers and feel sure we shall hear more of their successes in the future.

With regard to the future of the Club I can see it going from strength to strength. With our fine new clubrooms, our new gymnasium and our wonderful fleet of boats crewed by both young men and women, all that is required for success is the hard work and dedication which is so much part of our history and so necessary in rowing.

Finally I wish to thank our hardworking secretary, Denis Nihill, all office bearers and the members who have worked so hard to make this celebration of 120 years of rowing such a success.

> next In the Beginning