This was the first year of the World Depression, and although the effects were not felt early, there was an uneasy mood among the members. 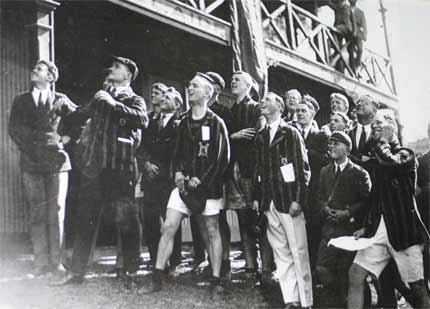 A little trouble unfurling the flag

to swivel rowlocks against the advice of the President and one or two other die-hards.

The level of water in the Torrens was unusually low after the new sluice gates had been in operation for a whole season. The water was let out near the river bottom, instead of over-flowing, thus helping to keep the silt moving. But the Corporation had overdone it, and with no spring rains, Henley-on-Torrens was abandoned.

Club Deep In The Doldrums

These could all have been factors in the noticeable laxity that had developed in the clubhouse. A notice had to be posted requesting `No Smoking in the boathouse while crews are in training'.

Grummet and Lucas got married, Shuttleworth went overseas; Wicklein, a consistent member of winning crews, transferred to the non-active list; W.O. Menz went abroad, so later did Gosse. Even Scotch College left the nest having bought Jolley's shed, and that cut out the caretaker, who had been living there.

So noticeable had been the lack of enthusiasm, and failure to win any races or even nominate for crews, that the Committee called a Special General Meeting to discuss ways and means.

J.H. Gosse was in the chair, and addressed the meeting. This sort of thing had happened before, he said. A powerful factor to overcome the malaise would be tactful and persuasive handling of members by the executive. To some extent it was due to the lack of contact between the active members and the senior members, and there should be some senior members always in the Club committee for reasons of continuity and experience. 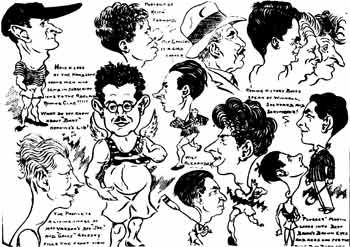 Suggestions that came out of the discussion were that more older members should help with coaching, and that there should be at least one night each week when older members could meet contemporaries at the boathouse and that an advisory committee of 3 be formed to assist and advise the Captain in selection, training etc. The advisory committee they elected was Grayson, Cudmore and Fotheringham; giants in their day.

A vote of thanks to the Chairman was passed unanimously with acclamation, which shows how strong was the influence of J.H. Gosse.

No mention was made of the conversion to swivels.

By the end of the season, the Club crews had won precisely one race and that was a Junior 4 in the Autumn Regatta on the Torrens.

Adelaide Rowing Club had not entered for any country regattas whatever. Although they entered for Champion 8's Champion Junior 8's and Champion 4's, they did not win any, nor any of the minor races at those regattas.

Not until the Autumn Regatta was the Torrens fit to use.

Mercantile club seemed to be winning everything, yet 3 members of the King's Cup crew, plus the spare man-cum-manager were Adelaide men - Linnett, Hopkins and Sheppard; Forwood the dogsbody.

Membership had dropped by 17 among active rowers by 3 in the non-actives and by 4 in the "country" or absentee category.

The Great Depression was beginning to be felt.